This is the second of three posts on the Bridgeport Coffee trip to Costa Rica in March 2017 by Mike Pilkington, president and founder of Bridgeport Coffee.
See Part 1 (Overview) or Part 3 (Terrazú).

We open the conversation about the science of coffee with, of course, climate change.

Throughout the history of coffee cultivation, there have always been cycles of extreme disease or insect infestation. Over the last 10 years, the expected cycles have been becoming more severe. The slow natural disaster of La Roya (leaf rust) outbreak of 2012-2015 was so severe that some regions of Central America saw production near 100-year lows. Many farmers simply gave up and left their trees to the fate of fungus and insects. Those that persevered did so by aggressively pruning (setting back ability to produce coffee from 3 to 5 years) or replacing the sick and dying trees.

Although the recent crisis has passed, modern farmers can not survive without the help of science. Despite the seriousness of the problem, there are many reasons to be hopeful that coffee as we know it, although it may look a little different, will survive and flourish. Reforestation efforts are underway in Costa Rica with a goal to offset the expected 2 degree rise in temperature by 2050.  The most exciting news from the scientific community is, the first public genome sequence for Coffea arabica, the species responsible for more than 70 percent of global coffee production, was released in January by researchers at the University of California, Davis. 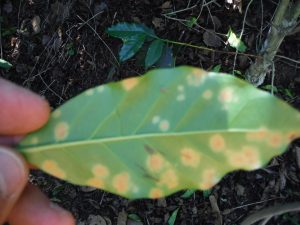 From the “Science Daily” research magazine:
“This new genome sequence for Coffea arabica contains information crucial for developing high-quality, disease-resistant coffee varieties that can adapt to the climate changes that are expected to threaten global coffee production in the next 30 years,” said Juan Medrano, a geneticist in the UC Davis College of Agricultural and Environmental Sciences and co-researcher on the sequencing effort.

On day 2 of my trip, I had the privilege of meeting some of the people doing fascinating, complex work in support of the Costa Rican coffee farmer. 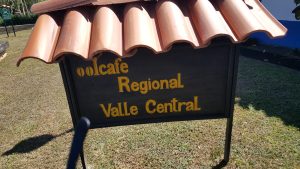 ICAFE is a public, non-governmental agency that has been empowered to enforce the Costa Rican law that governs the production, sale, and export of Costa Rican coffee. Their work is supported by the Costa Rican Coffee Farmer in the form of a 1.5% coffee export tax. It is important to know that ICAFE is protected from politicization by Costa Rican law.

Our first stop of the day was the 8-hectare research farm on the grounds of ICAFE. Although the species Coffeea Canephora (Robusta) is, by law, not allowed to be grown commercially in Costa Rica, varieties of the Robusta species exist in this farm. They are used for research and development of hybrids that show resistance to leaf rust and pest (including stem borer and nematodes). 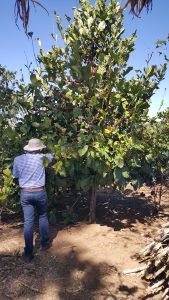 A relatively young Canephora variety. Unlike its Arabica cousins, these trees will grown to be 20-30 feet tall and are not self pollinating. Although cup quality is not near specialty coffee grade, these trees posses desirable disease and pest resistant characteristics.

Cultivars, Varietals, Hybrids?
In specialty coffee we tend to interchange words such cultivar, variety and hybrid, but they have specific botanical meanings. In the SCA (Specialty Coffee Association) map below, we can see better how cultivars and hybrids are related. As shown some hybrids are natural mutations and others selected and bred by man. Human beings have selected characteristics based on current needs. In the past, the selection process was focused on yield or size. Today, the entire coffee-producing world is in a mad scramble to find cultivars with resistance to disease and insects that possess desirable qualities in the cup. 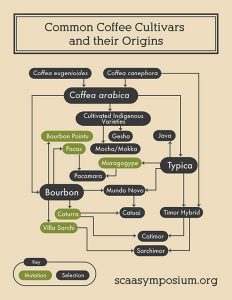 This is essence of the research being done at Cicafe. On the test farm there are a number of selected hybrids that are beginning to provide hope to the specialty farmer. New hybrids with excellent cup quality that can withstand the onslaught of Leaf Rust, nematode outbreaks in the soil, and a malady called “rooster eye.” Hybrids developed today will take 5-6 generations (25-30 years) before they can be produced from seed. In the interim, those that show promise must be produced by leaf cloning or grafting. Cloning and grafting are necessary and currently being done commercially. The cost to produce 100,000 trees, is on average, the same as to produce a million from seed.

An example of each:

Sarchimor- Selected by humans. Cultivars Timor and Villa Sarchi
Mature cultivar that can be planted from seed. Resistant to leaf rust and some types of nematode. Showing promising cup results at altitudes of 1100-1300 meters, especially with alternative processing. 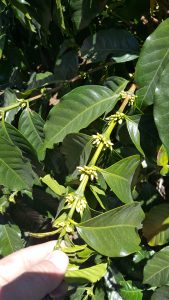 On this trip to Costa Rica, the Sarchimors grown in the Central Valley at 1100-1300 meters show great promise. This seems to be the literally the sweet spot for this hybrid.

Leaving the field and the studies of the Agronomist, we move to the lab to meet the Botanist working at CIFAFE. Like the Agronomist, the mission of the scientist working in the laboratory has shifted to a primary focus of developing strategies to assist the farmer in overcoming the challenges of the world today and what it is expected to become over the next few decades. The approach in the laboratory is not limited to the development of new hybrids. There is a lot of time and money being spent on strategies to protect the cultivars we have come to know and love.

This product has been developed and available for commercial use for Organic farming. Not harmful to coffee trees, this fast growing fungus is mixed with water and applied to the soil. It has been found to be extremely effective in preventing the deadly leaf rust fungus. The primary issue with this product is cost. Two to three applications are required annually, making this product unaffordable for most farmers. Aggressive pruning and tree replacement remain the best choice. 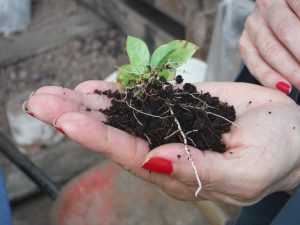 As trees are replaced, the modern farmer looks to hybrids that have not only leaf rust resistance, but also deep root systems which helps to limit stress during the dry season. Strong trees are less susceptible to insects and disease. 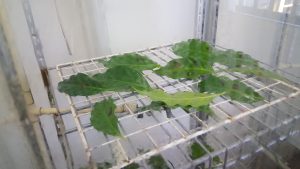 The fungus “Ojo de Gallo” or Rooster Eye is a fungus that spreads after heavy rains. Climate change is not limited to warming. Changes in weather patterns affect the annual cycle of all fruit bearing trees. A farmer in El Salvador told me once, “we used to have a season for avocados, but now they grow all year.”

CICAFE’s mission is not limited to the botanical. In the lab, they oversee the mandatory mill water discharge testing program, provide free soil sample evaluations, and are developing a computer data base that can identify green coffee origin in an effort to protect the Costa Rican coffee brand.

Today, I had quite a few questions answered. Thank you to everyone at ICAFE for their time. It was a wonderful day.